A Study of Selective Catalysis in Water

With costly Superfund cleanups making headlines recently, companies have realized that the most financially prudent solution to dispose of hazardous waste is not to produce it at all. In order to reach this goal, new heterogeneous catalysts will need to be developed that have high selectivity and activity in non-hazardous solvents. Andrews project will focus on the Knoevenagel condensation, a reaction important to industries from food additives to textiles. Generally, this reaction is performed in an organic solvent, many of which are carcinogenic. Andrews research will focus on the design and production of imprinted silica-based heterogeneous catalysts that will catalyze the reaction in water, the most environmentally benign solvent known. He will attempt to determine the role played by factors such as the degree of hydrophobicity of the local catalytic environment in making a good Knoevenagel catalyst in water. His project will contribute to the growing field of green chemistry. 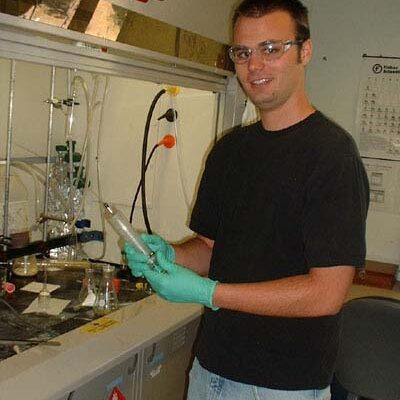