Enzymes are highly efficient biological catalysts. Understanding how enzymes catalyze chemical reactions into physiological relevant rates is of great interest. Moreover, electron and proton transfers are ubiquitous in biological processes, yet it has now become clear that such electron and proton transfers may have quantum mechanical effects. Andy will be studying soybean lipoxygenase, a model enzyme that accomplishes it’s catalysis through a proton and electron transfer known as hydrogen tunneling, a purely quantum mechanical phenomenon. In an effort to better understand how catalysis is achieved through hydrogen tunneling, he will attempt to clarify how the motions of soybean lipoxygenase facilitate effective catalysis. More specifically, he will incorporate an unnatural amino acid in soybean lipoxygenase that will serve as a fluorescent reporter for the protein motions in the enzyme. 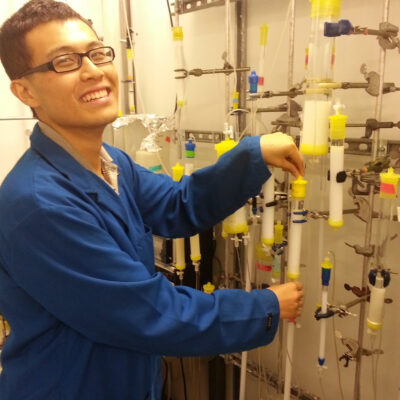