A 'Supreme Goddess' in the Making: The Evolution of Tara in Indian Buddhist Sculpture, ca. 5-8th centuries CE

Hillary’s research will take her to the states of Maharashtra and Orissa in central India, to the ancient Buddhist sites of Kanheri, Ellora, Aurangabad, and Ratnagiri, among others, where the earliest relief sculptures of Tara remain in situ. In tracking the early evolution Tara’s form, Hillary’s project will examine how the goddess is increasingly incorporated into Buddhist practice in the 5th-8th centuries CE. As Tara eventually becomes the most significant female figure in Buddhism with the rise of the Vajrayana (Tantric) school, Hillary’s study asks, can these works of relief sculpture – as visual texts – tell us as much as the written word about developing Vajrayana ritual technology? An examination into the origin and early evolution of Tara in Buddhist art, she hopes, will contribute to a better understanding of how and when Tantric Buddhism developed in India (and what it looked like). 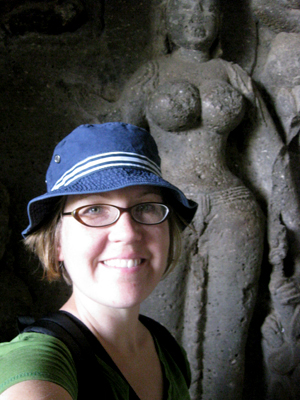