Irene’s senior thesis in Molecular and Cell Biology may contribute to the development of a vaccine for HIV-1. A potential target for vaccination against AIDS is the V3 loop region of the HIV-1 envelope glycoprotein, gp120, which plays an important role in viral infection. V3 adopts a -hairpin structure; the successful synthetic -hairpin peptide may thus mimic V3 and trigger an immune response. However, conformational fluctuations of peptides in aqueous solutions present an obstacle to this approach. Since the potential of fluoroaromatic interactions as a source of -hairpin stability has yet to be explored, Irene will apply previously developed models of fluoroaromatic interactions to design a small library of fluorinated peptides that should adopt stable -hairpin conformations. By comparing the binding affinities of those peptides, she will investigate the possible contributions of fluoroaromatic interactions to -hairpin stability, and explore the potential of resulting peptides in synthetic HIV-1 vaccine research. 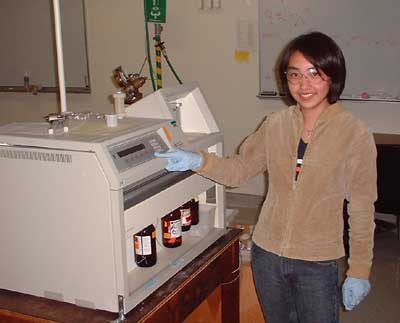