During the prison boom of the 1990s, the Asian American and Pacific Islander (AAPI) prison population in the U.S. exploded by 250%. AAPIs were found to be one of the fastest-growing groups of incarcerated peoples nationwide, despite occupying a relatively small portion of the total prison population. The growing bodies of literature on reentry and Asian American studies have however failed to capture the complex experiences of the racial “Other” entangled in the carceral system. Therefore, Janie’s research asks, how do formerly incarcerated AAPIs experience reentry into their families and communities upon release? Drawing from qualitative interviews, this project centers the lived experiences of formerly incarcerated AAPIs to ultimately gain a stronger understanding of the ways in which we can better support them as they reenter our communities.

Photo Caption:
The artwork pictured behind Janie is part of a larger project by illustrator Natalie Bui that she had done for Asian Prisoner Support Committee’s “Hope is Contagious” campaign. This is the illustration’s caption: 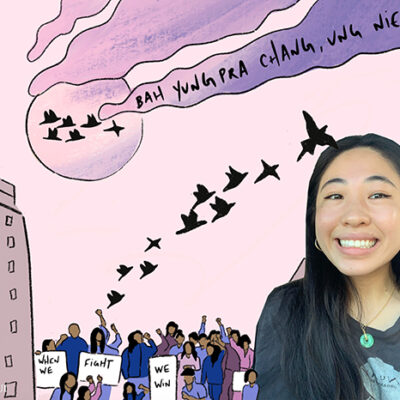