Migrating Minors Uncovering the Myths, the Facts, and the Figures: What Is Driving Central American Children to Travel Alone to the U.S.?

My research will investigate the reported phenomenon of increasing numbers of unaccompanied Central American youth migrating to the United States from May 2011 to July 2013. I will examine these questions: Why are these children migrating alone? Will this overall trend continue? Or is there a push/pull factor that is influencing this recent surge? What can be done to make this journey safer for these children? My study begins in the detention facilities and immigration courts of Arizona and Texas, then continues as I travel southbound through Mexico and by bus into Guatemala. Through participant observation and interviews with adults who regularly interact with the children, I will take the reverse route of the children migrating northbound atop freight trains. My project will culminate in an ISF senior honors thesis.

Haas Scholars has opened up doors I never would have even known existed, both literally, and also in my heart and soul. The people I have met, the scholars I converse with, and the opportunities to give back are exponentially more than I ever dreamed of. A mantra among Haas Scholars, Everything is research, became my guiding light. While I had prearranged key interviews with governmental agencies and NGOs before leaving Cal, it was the people I chatted up on the bus, the friends of friends, and networking every connection that provided the bulk of my data. Here is just one example: July 19, 2013 Two days ago I located an agency in Quetzaltenango, Guatemala that repatriates youth who have been detained in Mexico, some of them who were attempting to migrate to the US, others who were trying to find work across the border. As luck would have it, on my visit a busload of children had just arrived. I scheduled an interview with the director for the following morning and began talking to some of the family members waiting outside who had come to see their kids. I learned that many had come from distant parts of Guatemala to collect the youth & most had very little resources so would be spending the night on a nearby church floor. The following morning, I arrived with hot coffee & pancakes to distribute to the waiting families prior to my scheduled interview. The gratitude was overwhelming & many of the parents offered to give interviews, as well. Though my heart was heavy as I listened to the desperation of their situations, I gained a much deeper understanding of why many youth migrate north and it became very personal. This is more than just a research project now. My job is to give a voice to these families, to these youth and the thousands of others just like them. 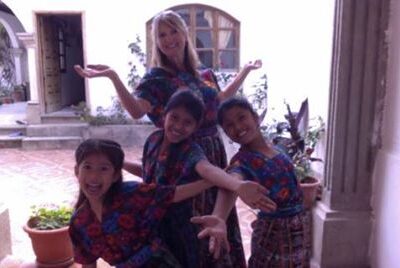