Ki Won’s project involves an investigation of cosmic microwave background radiation (CMBR). CMBR travels to us over cosmic distances, beginning its journey a short time after the Big Bang, the birth of the Universe. In essence, it is a snapshot of the aftermath of creation. Specifically, Ki Won will study the polarization characteristics of CMBR, using a polarization-capable radio telescope being built at the Lawrence Berkeley National Laboratory. Ki Won will develop a detailed plan for the use of the telescope to detect CMBR polarization, write software to automate the telescope and data acquisition, and perform analyses on the resulting observations for clues to this elusive signal. In this way, Ki Won hopes to make a contribution to the larger field of Cosmology and to increase our understanding philosophically and scientifically of our place in the Universe. 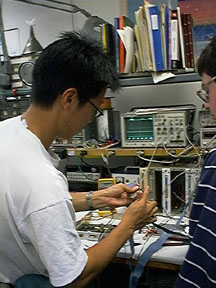