The Effect of Awe on Collective Creativity

Researchers have found that, in general, positive emotions lead to greater creativity (operationalized as increased cognitive fluency, flexibility, and divergent thinking) than do negative emotions. Increasingly, innovations and gamechanging insights are the product of not one creative person, but teams of people working together to produce results. It is essential to understand how creativity functions within groups, and how/which emotions play a role in increasing the creativity of these groups. Kristophes proposed research project addresses the question of how different positive emotions influence group creativity. Specifically, he will test whether awe, a positive emotion that has been shown to produce different cognitive and behavioral tendencies relevant to creative performance, and has also been shown to produce prosociality, increases group creativity.
Photo: Kristophe (second from right) enjoying a meal with fellow Haas Scholars during Orientation Week. 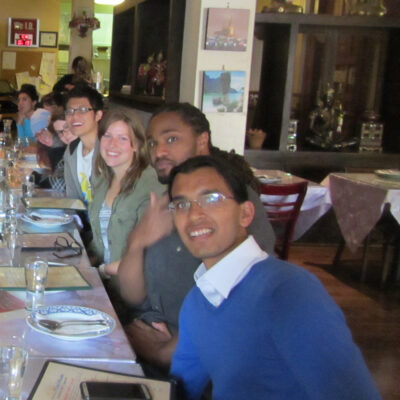