An Archaeology of Food, Race, and Gender at Fort Davis, Texas

My project will investigate the foodways of three distinct populations who occupied Fort Davis, Texas, during the second phase of the forts active period from 1867-1891. While permitting issues will not allow for excavation this summer, there are alternatives to excavation. One collection of artifacts was previously excavated from the enlisted mens barracks; I will examine the food related artifacts from this excavation. Additionally there is a set of artifacts that were collected while digging a drainage ditch at the fort. These artifacts come from several distinct areas of the fort and were carefully boxed and given provenience. There has been no analysis of this collection. I will also be contributing to the mapping of the laundress quarters at the fort. In the process of mapping, a catch and release of the surface scatter of artifacts will take place.
My research will include comparing records of military rations to other food-related items that will be excavated; I will examine the overlaps and intersections that occurred in food practices among the white officers, black enlisted and multi-ethnic laundresses. By examining the artifactual and documentary evidence at the archives of Fort Davis, I hope to answer the question of how race, ethnicity, and gender collectively played a role in the foodways of the different groups who populated Fort Davis in the later half of the 19th century.

June 10, 2013 Hi everyone! My computer crashed the night I arrived at my site. I am working on a solution. I do have everything backed up to a hard drive. I hadn't put my files on drive though. I recommend doing so. On a positive note, Fort Davis is a beautiful place. The research team met with the park rangers today; they are so excited to help us. They are also very excited about my project. Nobody has looked at foodways in particular. This week will involve setting up lab space and meeting with a local historian. I will also start some lab analysis and archive work. This is such a remote part of Texas, nothing but mountains and big blue skies. I can truly appreciate the journey that the pioneers and military personnel made to get here. June 11, 2013 I am staying in Alpine, which is about 30 miles from the park and town of Fort Davis. It is like Mayberry, but more rural. I have an old computer at home. My saint of a roommate is shipping it out tomorrow. The closest Apple store is in El Paso, which is a four-hour drive. I am working 5.5 days a week with my time spread between lab analysis, meetings with the park rangers, field survey and mapping. Repair on the crashed computer just can't happen now. I am so excited about how well things are going in the field I am trying to see the crash as just an almost clich example of Murphys Law. The Fort is so beautiful and the staff is so willing to share their passion for it's rich history. I am feeling so privileged to be able to contribute to the archeology of the park. I was in the field for a total of seven weeks this field season. I spent one week in Tucson at the Western Archaeological and Conservation Center (WACC) for training on the National Park Services data base system. Part of my contribution to Fort Davis Historical Site and the NPS is to contribute to the database of artifacts. There is one set of artifacts that were excavated in the 1990s during the digging of a drainage ditch. This group of artifacts has very datable deposits from several locations of the fort including the officers quarters and commissary. These items have not been cataloged or analyzed yet. I currently am working on this aspect of my research. At Fort Davis I worked on collecting as much data related to my project as possible. In the lab, I looked at a set of artifacts that were previously excavated from the mens enlisted barracks area. While much of this collection had been previously identified, I was able to add to the analysis and also use these artifacts as a set of comparative artifacts for use in identifying other items. I spent a great deal of time mapping the laundress quarters. While there have been no excavations at this area of the fort, there were obvious signs of building foundations and very rich amounts of surface scatter. Permitting issues didnt allow for excavation or actual collection, I worked on mapping in the artifacts on the surface of the ground. It was a catch and release style collection. Every artifact in the area was photographed and described. Historical Archaeology uses artifactual and documentary evidence to take a closer look at research questions. I spent at least one full day a week in the archives at Fort Davis looking at commissary records, journals, and census data. Now that I am back in Berkeley, I still have lab work to do for my project, and I am also working on my theoretical framework for my senior thesis. I will also be looking at the similarities and differences in the different sets of artifacts. I look forward to starting the semester and meeting with the other Haas scholars. 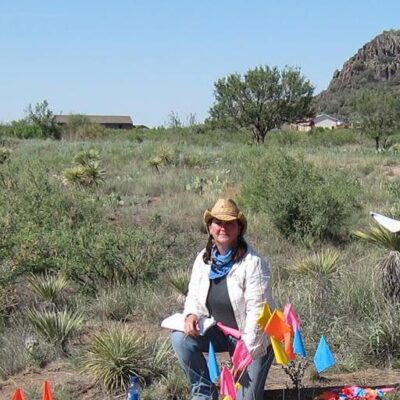