Beyond Holding Up the Sky: Beijing Women in the Era of the Olympic Games

Based on Lijia’s travels in China in summer 2008, she composed a collection of three chapters of prose poems intercut with verse as cultural narratives of gender, reanimated as myths of Chinese history and femininity situated onto an invented milieu, the neither/nor setting of contemporary China hosting a global event. The first chapter, (public airing), seeks deconstructed understandings of this setting beyond the partial, i.e. incomplete, privileged, and relentlessly deferred by emerging phenomena. The second chapter responds to a French feminist discourse on criture fminine, particularly a fascination with how the gendered body affliates itself with particular forms of writing. The third chapter will serve as a glossary for touring the other chapters. This collection hopes to incorporate the reader into a transnational project of creating a feminine text, in which textual gaps mediate a readerly reworking of the text, sutured to the reader through endlessly permutating subject positions attending the text blocks. 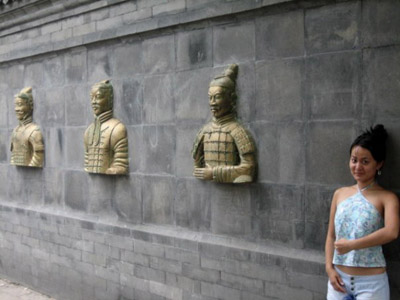