Role of Interferons in Primary Dengue Infection in Mice

A Molecular and Cell Biology major, Manasa will study the Dengue virus (DEN), which causes the most prevalent arthropod-borne viral illness in humans worldwide, with an estimated 2.5 billion people at risk. Primary infection results in dengue fever (DF), an acute disease. In primary infections, DEN induces an effective immune response that may involve interferons (IFNs). IFNs are proteins produced by cells in response to various stimuli, especially viral infections, and are known for their antiviral and immunomodulatory effects. The role for IFNs in offering protection against the dengue virus (DEN) has been demonstrated in vitro, but neither the in vivo relevance of these in vitro findings nor the mechanisms of IFN action against DEN are known. Therefore, Manasa will explore the role of IFNs a, b and g in primary dengue virus infection, as well as the mechanisms by which the IFN receptor pathways resolve primary DEN infection in mice. 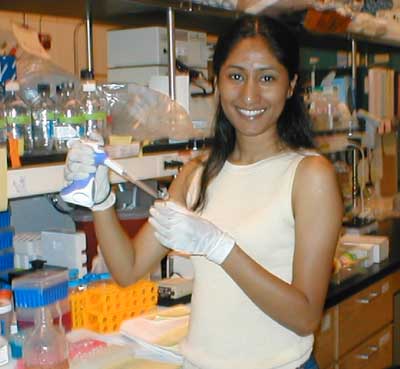