The Role of Cellular MicroRNAs in CMV Infection: Identification of MicroRNA Targets and Downstream Effects Using SILAC and Mass Spectrometry

Since their discovery in 1993, microRNAs (miRNAs) have become an area of active research and are currently believed to rival transcriptional regulation as a means of controlling messenger RNA levels and ultimately protein production within a cell. In response to viral infection, the cellular miRNA profile shifts to regulate specific protein levels and combat infection. Cellular miRNA mir-7 has been shown to be significantly upregulated following infection with Cytomegalovirus, a beta-herpes virus present in up to 80% of the population. However the messenger RNA target and effects on protein levels have yet to be elucidated. In her research, Marissa will use mass spectrometry to monitor protein level changes after overexpression of miR-7 to identify potential messenger RNA targets and downstream molecular pathway effects and their role in Cytomegalovirus infection. 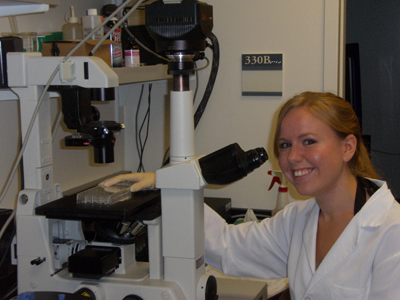