First in Flight: A Comprehensive Study of Etruscan Winged Demons

Current Bio: After 3 years supporting the CEO of a SF based nonprofit (PRC), Marvin recently returned home to UC Berkeley as an executive assistant within the Principal Gifts and Strategic Initiatives, a unit within University Development and Alumni Relations. He supports the AVC of PGSI and both EDs.
Haas Scolars Project: The so-called winged-demons of Etruria appear most prominently in funerary art on painted tomb walls, as well as on clay and stone relief, vase painting and sculpture. Yet, there has been little attempt to comprehensively study and interpret their various forms and features, their religious function and funerary contexts. The Soprintendenza of Southern Etruria has invited Marvin to conduct research this summer in the storerooms of the Banditaccia Necropolis at Cerveterithis is a rare opportunity to work on unpublished tomb contents. Marvin plans to conduct a full assessment of winged figures as they appear in tomb assemblages, in addition to their use as dcor on the painted walls of tombs. Marvins project will shed further light on Etruscan religious practices, underworld cult figures, tomb rituals, and funerary iconography. 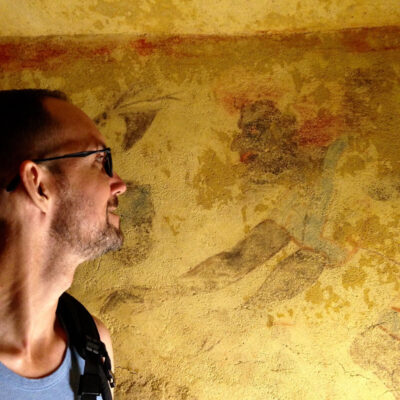