Midwifery Practices in Afghanistan: The Influence of Purdah on Maternal Health

Every thirty minutes an Afghan woman dies due to birth complications. Skilled providers attend only 5% of births. My research compares traditional cultural practices of midwifery with Western medical practices. I will explore the role that the cultural practice of Purdah separation of women from men plays in shaping maternal health. Since the U.S. occupation, USAID has funded midwifery schools. However, current political tension between the Taliban and the U.S. military generates a concern for the future of maternal health care. I will investigate how midwifery practices have evolved from the Taliban regime to the current U.S. occupation and have impacted midwives, medical practitioners and women. I will conduct case studies in the city of Kabul and Kunduz. My methodology consists of participant observations and oral histories. My purpose is to contribute to research on medical training and cultural practices that can positively affect child and maternal health.

This summer has been a life changing experience. At the beginning of the summer I was nervous about embarking on a very dangerous journey on my ownnot only as an independent researcher, but as a young woman returning to Afghanistan. I have always wanted to go back to my beloved country that my family and I fled when I was two months old, due to the war against the Soviet Union. I am glad that I chose to go back even though my life was at risk due to the current war inside the country. I am never going to forget the sounds of the loud blasts from suicide bombers and gunfire right around me, or seeing vivid images of injured and dead civilians on live television just two hours after arriving in Kabul. I remember crying, being scared, and wanting to escape the first day I got there. But, then I realized that the things I was having a difficulty enduring are the norm for the people that live there. I was humbled by the fact that my people live their entire lives with these conditions so I could not just pack my bags and leave. I was there for a bigger purpose, my research on maternal health, so I decided to be strong and to stay until I finished my research. Since men are not allowed in maternal hospitals, as a woman I knew that I had access to the hospitals and to Afghan women to conduct my research. As a result, I felt that it was my duty and responsibility to stay and to use my research to help Afghan women who have suffered through so many years of oppression and war. Thus, I believe doing research in a war zone was my biggest challenge, even in spite of the difficulties of being a woman in Afghanistan and facing daily challenges working in a maternity hospital. Within the first week I realized the challenges of being a woman in Afghanistan, which confirmed the fact that it is one of the most dangerous places in the world to live as a woman. Initially, I assumed that I would be easily accepted by everyone since I am an Afghan woman, I know the cultural norms, and I speak Dari and Pashto fluently. However, this was not the case. I was viewed as a foreigner by my own people, and it took a long time to build up trust and develop a relationship with some of my participants in order to talk to them about deep and personal issues like reproduction and maternal health. I also went with the assumption that, as an educated Afghan woman, I would have some type of presence or voice amongst the men therebut unfortunately, this was not the case most of the time. Experiencing these challenges helped me better understand my research and learn that there are so many factors that play a role in Afghanistan having some of the highest maternal mortality rates anywhere in the world. An unforgettable memory from my trip was when I was asked to deliver a baby due to a lack of doctors in the hospital; it was one of the most beautiful moments of my life. I cannot describe how amazing that moment was when I was finally able to help the mother make her last push after being in labor for hours, and then within seconds see the baby come right into my hands. One of the most powerful experiences in life is to witness a child being born. This is a memory that I am never going to forget from my trip to my beloved country, Afghanistan. I was also able to assist during a C-Section surgery. It was the first time I had witnessed any type of surgery, but it was heartbreaking to see under what terrifying and horrible conditions the surgery was being performed. Despite the conditions, being able to witness this surgery there has greatly increased my respect for all our women, especially mothers. Lastly, one of the most devastating experiences I had was witnessing newborn babies and a mother pass away due to doctors neglecting their responsibilities and a lack of resources. I took away from these experiences a renewed passion for my research and for achieving my dream of becoming a physician in order to help others. I have realized that two months is not enough time to collect all the data I need for my research. It was extraordinarily hard to conduct research in a war zone and especially during the holy month of Ramadan when I had to fast. War, poverty, loss, and violence plays a critical role in almost every Afghans life on a daily bases. Thus, shaping their culture and how the Afghan people experience freedom and love in a completely new way. My research led me to realize that there are so many other problems that still exist in Afghanistan, many of which are interconnected with maternal health. Being able to fix these problems is going to take a lot of hard work and timebut nothing is impossible because I still have a great amount of hope for change. This eye-opening journey has allowed me to see Afghanistan in a new light, and has forced me to rethink the definition of help. I am eager to continue my research and raise awareness on maternal health in Afghanistan, and I hope that my work will bring positive change to my country. My summer was truly a life-changing experience, and I am so grateful to Bob and Colleen Haas for giving me this opportunity. 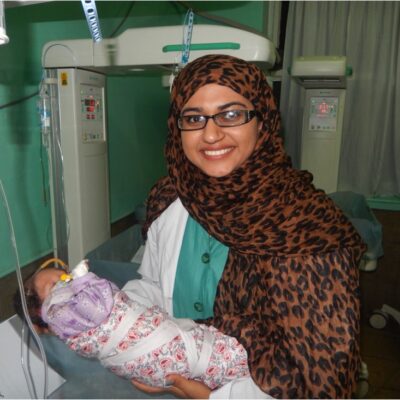