Sympathy for the Loss of a Comrade: Black citizenship and the 1873 Fort Stockton Mutiny

In 1873, more than 100 Buffalo Soldiers at Fort Stockton, Texas signed a petition requesting formal censure of the post surgeon for his racist refusal to treat a sick and dying man. The officers responded by putting the soldiers on trial for mutiny. Nicks research will look at how these soldiers, most of whom were born into enslavement, came to understand and express their rights as United States citizens. This research will combine primary documentary sources, housed at the National Archives and Fort Stockton, with secondary literature on African American agency, literacy, and solidarity in the Reconstruction Era. Through this work, Nick will explore how the law was used to both assert and contest notions of personhood a theme which remains as relevant today as it was in 1873. 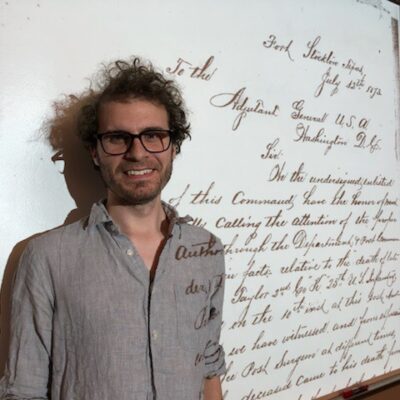