The Architecture of the Invisible: Women, Workers, and Water in the New Argentine Cinema

Current Bio: Nicole completed an MFA at UCLA in Film Production. She’s since been working in cultural programming in the non-profit sector: Palm Springs Int’l Film Society/Festivals, IKAR (ritual and advocacy), and now at Friends Of The Observatory, the non-profit fundraising and advocacy partner of Griffin Observatory in Los Angeles, CA
Haas Scholars Project: The placement of a womans body attests to the gender dynamics of a film, so how do recurring spatial settings figure female characters into the collective national imagination? To address this question Nicole will conduct a survey of contemporary womens roles in American and Argentine national cinemas. She will approach this project through a phenomenological lens because phenomenology views the body as a mediated image through which actual historical and cultural expectations emerge. Nicole will assess twenty films made since 1995; she will include mainstream blockbusters that target domestic audiences and experimental films that are screened to international audiences at festivals. Nicole will travel to Argentina to interview Argentine filmmakers, critics, and professors to create a critical discussion where there is little as the sample is recent. 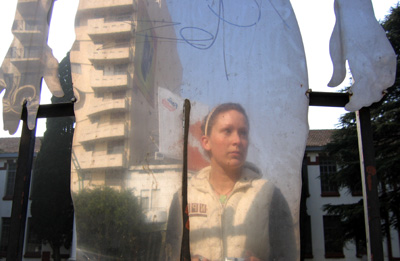