In the burgeoning field of genetic engineering, living systems are engineered to perform desired functions such as fighting cancer, sensing harmful chemicals, or producing useful compounds. However, cellular processes are unpredictable and genes do not always act as expected. In order to find a gene’s optimal setting, scientists currently need to search through “libraries”–large numbers of genetic variants–which is labor and time-intensive. Robert’s research centers on developing a new technology called MiCodes, or Microscopy Codes, which will speed up our ability to perform library screening under the microscope by barcoding cells with fluorescent tags. If successful and adopted by the scientific community, MiCodes would fundamentally change the way library screening is done for many applications, including cancer research, cell culture studies, and biofuels production.

This summer, I learned what independent research entails. Truly being on your own and having your entire project depend on you alone was both a daunting and exciting experience. I enjoyed setting my own schedule around my experiments, having the freedom to choose the direction of the project, and having the responsibility of presenting progress to my professor by certain deadlines. Having the flexibility to set my schedule allowed me to could go into lab and leave any time and arrange my day around my experiments. At first, being the sole driving force behind my idea was incredibly intimidating, but I came to enjoy the responsibility. From speaking to other undergraduates doing laboratory-based research, I came to realize that very few have the opportunity to do this self-lead graduate level work and that the Haas Scholars Program has given me an immense privilege. I have come to realize that time is the most important resource in research. Pushing a project along faster is often worth doing experiments in duplicate to make sure that something will have grown up and be ready for the next step. For example, I spent two weeks troubleshooting a DNA assembly reaction that was just not working and had been testing problematic steps a few at a time, waiting for the results of each test before continuing on. As a result of this, I ended up wasting a week when in retrospect, I should have just initially tested all potential issues at once. Coupled with the slow growth of cells, every mistake I made was heavily punished in wasted time. The most important knowledge I learned this summer was a greater understanding of myself. The been a combination of independence, time for introspection, and research tasks have encouraged me to learn about myself. I have learned about when I am most productive, my work ethic, aspects I need to improve at, and what makes me stand out. I have accomplished much this summer and in the process learned about the realistic pace for research. I was able to replicate the results of the laboratory from MIT I am in collaboration with and demonstrated that my assay matches their prediction. With those results, the lab computationally designed a new set of material for me to test with MiCodes. Additionally, I tested out an improved MiCode based on issues I have been having. In the past few weeks of summer, I began a significant experiment that will likely take the next month to accomplish. In summary, I am satisfied with the work I was able to accomplish his summer and am excited for this upcoming experimental work! 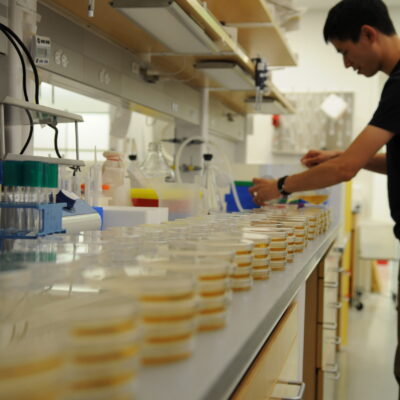