Collapsing the Frame: The Moving Body as a Site for Social (De)construction

Collapsing the Frame delves into the space between two categories contemporary and commercial dance to ask how the moving body functions as a site both for composing and deconstructing normative conceptions of embodiment, physicality, identity, and sociality. By researching the particular case of commercially produced choreographies, the project not only problematizes the categorical divide between high culture and popular/commercial culture, but intends to ask how dance productions that cross this boundary function as corporeal and public experimentations with collective identities. Through a comparative analysis of three sites of dance practice and performance (Los Angeles, Brussels and Vienna), the intent is to provide a platform for understanding the ways in which contemporary dance affects and is affected by the burgeoning commercial industry.

Learning Trisha Browns early repertory over these last few days has begun to give me some sense (an embodied one that I dont know if Ill be able to articulate yet in words) of the motivating purpose or curiosity that exists in postmodern and contemporary dance. Initially Id chosen to take the Trisha Brown workshop as a way of setting this present moment of contemporary dance within its historical context, hoping to be able to better define the parameters of what this so far indeterminate category of contemporary might be in relation to its past. But in the last few days other connections and differences between contemporary and commercial have been arising that were really unanticipated. Almost immediately in the workshop the most apparent connection between Trisha Brown and other contemporary work Ive done here at the intensive was this notion that the movement choreography is not motivated by aesthetic choices but rather by experiential and physical ones that occur at an anatomical level in the body of the dancer. That is, rather than develop movement in order to create a certain visual aesthetic for the audience, choreographers in these classes talk of developing movement from the dancers kinesthetic, anatomical, mechanical, and internal experience of the movement. I knew beforehand that Trisha Brown was one of the first choreographers to use dance as physical exploration of the body rather than an aesthetic or virtuosic display, but I didnt know that my doing the movement would trigger such an internal understanding in my own body of what this post-modern (and, I would argue, contemporary) project is. The instructor, Michelle Flourine, began the class by explaining that in this particular piece we must move not from our center but, instead, from our distal ends, which she called the hole-version of our dance. She asked us to picture ourselves as donut-shaped bodies, moving with an empty, hollow space at our center with all the mass and volition of our bodies pushed out into furthest end-points. This instruction, besides being incredibly unusual in a dance class, where for the most part movers are asked to move from the center and never to be center-less, was also not aimed at producing a certain visual quality, but instead at having us gain access to a specific physical experience within the body. However, this differentiation that I made between internal/visceral and external/visual choreography on the first day of class was challenged over the next few days as I realized how many of the movements we learned were defined only as a relation of the body to the space it occupied. All of the gestures were set at 45 or 90 degree angles to the space, and the instructor constantly reminded us not to drop back into ourselves, but to stay constantly aware of the space and our relation to it (thus extending the dancers internal experience out into an external appearance and a specific visual impact). This meant that I couldnt simplify the difference between commercial and contemporary to an internal/external one, for even those choreographies whose intention is to explore something internally inevitably produce an external and visual effect, and in fact are very conscious of it for in the end, they are being made for the stage, not just for the studio. Essentially, what Ive realized is that the natural, mechanical, and pedestrian movement we explored in the workshop, event though not driven by a particular aesthetic, is not as aesthetically neutral as is presumed when talking about postmodern dance. The movement inevitable produces a certain aesthetic, regardless of its motivating principle of internal exploration. But this leaves me with another question does this difference in the intentions of postmodern or contemporary choreographies change somehow change what kind of movement is being made? That is, does the intent to explore internal physiological experience in contemporary lead allow for a kind of movement that cannot be made when only thinking about the external visage of the performance? 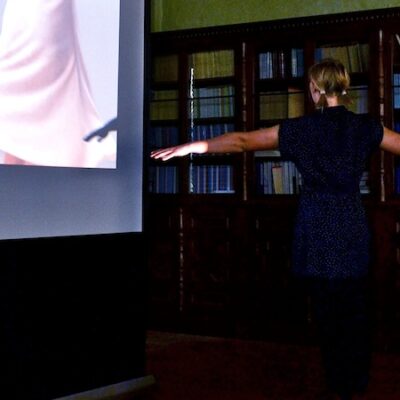