Sean’s project addresses two major questions in biochemistry: what is the nature of antibody catalysis, and what is the nature of transiently formed refolding intermediates. He is investigating whether antibodies that have been shown to catalyze conventional chemical reactions can be made specifically to catalyze a protein folding reaction. His project is based on the hypothesis that antibodies can recognize, bind, and stabilize high-energy intermediates of the refolding process, thus accelerating the rate of refolding. 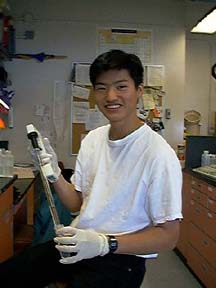