Through an attempt to gain a sense of the significance of Plato’s extensive discussions concerning the nature of language, this study undertakes to understand how the dialectical representation of rhetoric and the regulation of sophistic epistemologies specifically play into securing the institutionalization of philosophy. Foregrounding the particular role of the sophist Gorgias, both as a recurrent figure in the Platonic dialogues and as a thinker in his own right, in establishing the disciplinary identity of philosophy, Valerie will set out to show how understanding Gorgias’ Encomium of Helen as the paradeigma of sophistic speech grants us the means of critically engaging the metaphorics of desire and sexual subjugation that Plato himself brings into play in legislating the conditions for the realization of the philosopher and the legitimization of philosophy as the authentic ‘logos’, among other forms of discourse.
By reading the epistemic entailments of rhetoric’s discursive abduction through the political entailments of Helen’s sexual abduction and subsequent condemnation within Homeric myth, and drawing from the insights of Andrea Nightingale, Mikhail Bakhtin, Martin Heidegger and Pierre Bourdieu, among others, Valerie will venture a new way of understanding the Platonic corpus, wherein philosophy is a kind of seduction; Helen, a violence on the level of language; and the Encomium, a work of tremendous significance, though overwhelmingly dismissed as “mere play” and sophistry in the tellingly pejorative sense. 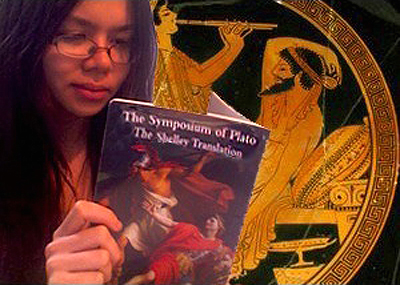