How Do People Living Next to Illegal Dump Sites in Oakland Cope with the Psychological and Physical Consequences of Everyday Life?

Imagine going to bed at night in your neighborhood, and slowly, over weeks, you witness your community being transformed into a scene that resembles a third-world country. Critical research examines the psychological and physical consequences of people living in urban centers where illegal waste dumping is a condition of everyday life. Oakland’s city streets have been overrun with illegally dumped trash. Before 2008, the dumping was confined to the backstreets of low-income neighborhoods of East and West Oakland. Today, middle-income communities are waking up to piles of debris on the main streets, parks, and recreational facilities in their districts. Violet’s research examines what city government agencies, and the citizens are doing about it and identifies how the tolerance of unlawful waste stigmatizes the city’s image. 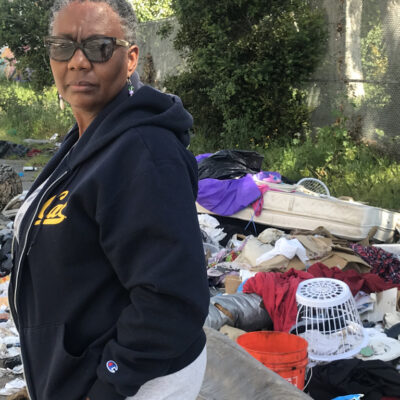