Income Tax Reform, the Evolution of Inequality, and the Boost of Domestic Demand -- In Search of a Sustainable Economic Growth Model

As Chinese economic reform deepens and widens its scope, finding a model for sustainable growth is of paramount importance. In this research, I will investigate how changes in the personal income tax structure would boost domestic demand as a stable driving force for economic development, focusing mainly on a flat tax structure. I will analyze past income tax reforms, collect and analyze empirical data and personal stories, build and extensively test models, develop a policy proposal, and analyze its international impacts. Since income tax directly affects the disposable income of the majority of the residents in China and thus directly influences domestic demand and social equity, my research results may expand our understanding of the precise economic reforms that lead to sustainable and stable economic growth for China and abroad.

As said by Marcel Proust, the real voyage of discovery consists not in seeking new landscapes, but in having new eyes. Although I have been to many different places, it was the trip back to China this summer, the place where I was born and have lived for the first eighteen years of my life, that first felt like a real voyage of discovery to me. The land that had always seemed so familiar to me would never be the same again. The people, the language, and the culture all seemed so different through the lenses of a scholars eyes. Things I had taken for granted and went unnoticed have finally started to emerge from below the surface. My research is on how to reform the personal income tax system in China to boost income equality and domestic demand. As a first step, I needed to find out about the real income distribution and personal income tax collection situation in China in order to evaluate distributional effects of different policy changes. Yet the search for data turned out to be quite an odyssey which led me to a mix of bitter disappointments and sweet surprises. But just like any research process, the joy of each big and small discovery and the help and encouragement of so many amazing people along the endless journey made all the efforts worth it. Analyzing household survey data or tax administration data are generally the two ways of estimating income distribution, the latter being more accurate especially at the top end of the distribution while not fully covering the entire population (especially those below the exemption threshold). Both may differ from the real situation due to misreporting or tax evasion, but each could present a picture very close to the real one with scientific methods and careful conduction. What I have been doing this summer was to search for access to such detailed data from the government and research institutions to perform statistical analysis. Although data resources from the government was generally extremely limited, I was glad to see that many universities have started conducting their own income surveys and publishing micro-file data sets to researchers around the world. I was able to get data from the China Household Finance Survey (CHFS), the China Household Income Project (CHIPS), China General Social Survey (CGSS), and am waiting to hear back from the Tsinghua-Citi China Household Consumption and Finance Survey. These surveys generally cover a wide range of parameters and each has distinct characteristics and advantages. However, since such projects have just got started several years ago in China, there was no dataset available that has consistently covered consecutive years for a long enough period of time. Hence I am considering re-exploring publicly released government data while making up for their lack of details with econometrics methods as developed by earlier scholars. It would require more techniques and critical thinking, and I am embracing the coming challenges. While I was in China, I was also able to speak to the people behind those silent numbers. The conversations really shed new lights on the implications of the data and the stories untold by the data, and were of great aid for my understanding of the administration of tax policies. I got to hear renowned Chinese fiscal policy expert reflecting on changes of personal income distribution and tax structure through the years. I got to hear officials at local bureau of taxation going over their current reform tasks and showing me their tax colleting and tracking system. I learned not only about progress on the reinforced tax collection of high income earners, but also the inherent difficulties in implementation. I got to know the administrators expectations, hopes, concerns, and experiences, which are usually not widely publicized. Meanwhile, I have also been reading extensively on research papers in the field of income distributions, taxable income elasticity, optimal taxation theory, and especially China's income distribution regarding the large scale of hidden income and the lack of transparent data. By reading these works of established researchers, I have learned so much about theoretical background and analysis methods, as well as how carefully they control for any possible disputes and test for robustness before reaching a conclusion, which will be a great guidance in how I would conduct my own research. As I was diving deeper into the research, the level of inequality as witnessed and experienced by myself and the scale of hidden income as estimated by scholars was shocking and even disheartening. The problem of rising inequality and unfair income distribution has been drawing attention from scholars and the government and I was glad to find out that new institutions and new surveys about income of households and individuals have been providing precious building stones for research in this field. Although my research would not deliver the silver bullet for all the problems, it would at least be a first step on the pursuit of a more equal society and sustainable economy. To be honest, there were times when I got tired of rejected requests and broken expectations and started to question the entire summer plan. There were even times when I seriously considered switching entirely to other countries where tax data were readily available for anyone to look into. Yet later I realized that it was precisely because of the lack of detailed data and previous work that my work would have a significant meaning not just to the academic inquiries but to the well-being for the billions of people living in the second largest economy in the world. It was also precisely because of such obstacles and challenges that I was constantly pushed outside of my comfort zone to cope with hard circumstances with persistence and creativeness. And that might just as well be the nature of research and the purpose of the Haas Scholars Program. 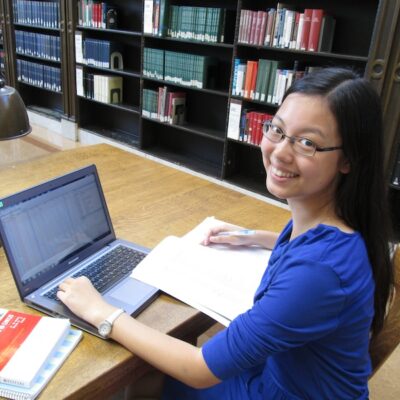