Uncovering the Genesis of Omagua: A Contact Language of Peruvian Amazonia

Most languages spoken today are of roughly direct descent from other, perhaps extinct, languages. Latin is the famous progenitor of the Romance languages. However, the pre-history of some languages is not one of direct descent, but rather of contact, or mixture. Omagua is a highly endangered, pre-Columbian contact language of Peruvian Amazonia, with only two remaining speakers. Building off of previous work, Zachary will conduct eight weeks of fieldwork in Peru. With more comprehensive linguistic data, he will employ standard historical-linguistic methods to determine the languages involved in the genesis of Omagua and sketch the socio-cultural and grammatical results of contact. Zachary’s work will contribute to research on contact languages generally, as well as shed light on the interactions and movements of indigenous populations before the advent of Europeans. 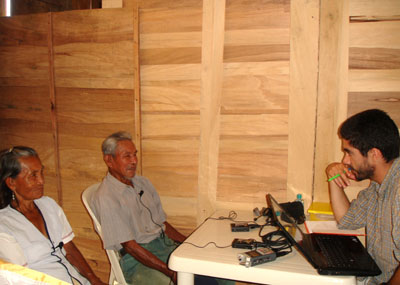