Kaloum Bankhi (Home of Kaloum): A Migration of Architecture

Due to the rapid growth of the population over the last several years, the slums of Kaloum in Conakry, Guinea have lacked efficient housing and clean sanitation infrastructure. It has become common in many families in Kaloum for parents and older children to alternate their sleeping hours due to lack of sufficient sleeping spaces for the entire family. In addition to the lack of sufficient living space, non-hygienic sanitary conditions are also prevalent in these communities. Over the years, these phenomena have become part of the lives of the people from Kaloum and they have incorporated them into their lifestyle. These uncomfortable conditions have led to many associated health and social problems including illness and a high unemployment rate.
Kaloum Bankhi addresses the lack of housing by maximizing the use of the minimal spaces these families previously had and provides a new cost-effective home with movable features that allow for multiple uses of the same space. The project uses the term migration as a platform that literally mimics the term to establish an architectural language that serves to further promote the pre-existing collaboration and support among these communities. To illustrate this migration, the Kaloum Bankhi references the Shotgun House concept that once originated from West Africa and later developed in Haiti before becoming a ubiquitous house type in Louisiana, United States. This migration begins from the one room dwelling and expands to the neighborhood and continuously to the entire city. As a result, this creates a more inclusive habitat and engages the population into shaping their daily lives.
Follow Aboubacar’s project on Instagram.
Read an article about Aboubacar’s project here.
Read about Kaloum Bankhi’s recent partnership with Oakland-based nonprofit Youth Spirit Artworks here.

Aboubacar Komara was born in Guinea (West Africa) and lived there until November 2013, when he won the diversity visa lottery that allowed him to move to the United States. Seeking a better life and an opportunity to change the lives of the people around him, he moved to the United States alone, leaving behind his mother, siblings, and extended family. While growing up in Guinea, his father earned a salary of about $250 per month to provide for a family of 15 that included many relatives from both sides of his family. In 2008, while in high school, Aboubacars father died of heart problems. After this loss, Aboubacar received much emotional and financial support from his community. Everyone helped him in whatever way they could. Even the funds to purchase his airline ticket to come to United States partially came from extended family members, friends and neighbors. Without their help, Aboubacar would have not been able to come to the U.S. and therefore would never had the opportunity to study and learn at UC Berkeley. During his time at Berkeley, Aboubacar has been part of many different social clubs and was fortunate enough to participate in UC Berkeleys first Solar Decathlon design team that participated in a competition organized by the US Department of Solar Energy. The Solar Decathlon is a design-build competition that challenges students from all around the world to build full-size energy efficient houses. The UC Berkeley team won third place among thirteen universities from the US and Europe. Aboubacar recently received the 2018 Alpha Rho Chi Medal after being nominated by Architecture faculty in the College of Environmental Design. The Alpha Rho Chi Medal honors a graduating senior who has shown an affinity for leadership, performed willing service for the department, and gives promise of real professional merit through his or her attitude and personality. Aboubacar enjoys discovering, exploring, travelling to new places, as well as playing soccer and watching comedy whenever he has some free time. He speaks six different languages including Malinke, Susu, Konianke, Pular, French and English. His goal is to speak 10 by the age of 30. 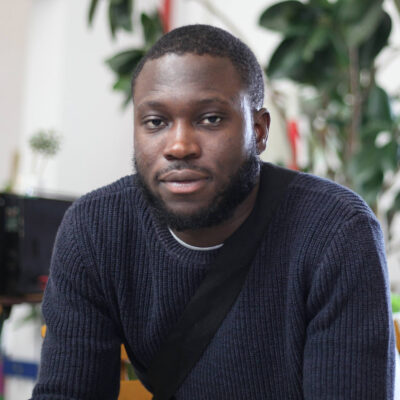