Adrins project is concerned with the Tijuana-San Diego border and a lack of social consciousness for the deportee community. Through a series of interactive Art installations at the US-Mexican border, Adrin will present the social conditions that the deportees endure in the city of Tijuana. It is his intention to bring to the fore the stories of migrants that have not had the opportunity to be heard. Supported by local organizations and artists, such as TJTQ and Fungi Express, the Art installations will target the binational population on the Mexican side of the San Ysidro-Tijuana pedestrian border. In the medium of chalkboard, photographs, coloring books, scale-models, and more, the project will engage with the transborder community seeking to form a sense of belonging and unity. The stories shared by the deportee community will inspire and be the base of the Art installations presented at the border for future diffusion. The project will enhance the dissemination of deportees stories hoping to bring the attention from the relevant authorities, and aiming to implement an insertion social program that could help the community into adapting to their new city, Tijuana. The Art installations located at the border will run monthly. At the end, all Art installations, photographs, and documentation, will culminate in an open exposition where they will presented in hope to create a sustainable, long-lasting group for the continuation of the project.

Adrin was raised in Rosarito, a small town in the Tijuana border area. All of his education was in Mexico until college. Then, he attended a community college in San Diego. He crossed the Tijuana-San Diego border, daily, for three years before transferring to UC Berkeley. Coming from the US-Mexico border, and experiencing it on a daily basis, provided him with a transborder vision that he took with him to Berkeley. Inspired by the arts and literature, he majored in Latin American literature in the Spanish and Portuguese department where he is graduating with the highest honors for his thesis, and being awarded with the Cervantes Prize along with the John K. Walsh Scholarship. During his time at Berkeley, he was able to explore his interest in borders in the forms of art and research. He created and facilitated a DeCal on Latin American Music where students explored issues of migration and identity in Latin America. He had the opportunity to be part of URAP, and he volunteered in Oakland as an ESL teacher. He became a manager in his co-op, in the Berkeley Student Co-operatives, a place where he found his creative side. Thanks to the Gilman Scholarship, he is currently in his last semester studying abroad in Rio de Janeiro, Brazil. While here, and with the support of an undergraduate research scholarship from the Institute of International Studies, he is conducting a comparative border study, a topic he plans to continue to pursue in graduate school. 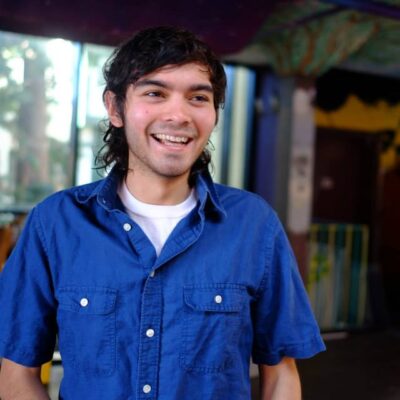