Brett and Ailns project engages the Munduruku indigenous communities of the northern Brazilian Amazon in a participatory, counter-hegemonic mapping project. The Munduruku people are currently fighting against the Brazilian governments plans to construct what would become one of the worlds largest hydroelectric dams, the So Luiz do Tapajs, and lead to the decimation of the Mundurukus means of survival and of a sacred place central to their identity as a people. With the support of partner organizations Amazon Watch and Digital Democracy, Brett and Ailn will work alongside communities to produce maps that depict the land practices, cultural spaces, and histories of the Munduruku through community workshops and open-source mapping technologies. In positioning the Munduruku as the leaders of the mapping process, this project creates alternative cartographic representations to support these communities lobbying efforts on the national and international level.

Ailn and Brett both graduated with honors from UC Berkeley in Spring 2016 with bachelors degrees from the Department of Geography. They share a long-standing interest in the sociopolitical dimensions of resource governance in Latin America. As an undergraduate, Brett developed a strong interest in the political economy of development and environmental resource management. His work experience at the United Nations Development Program and the U.S. Department of State in La Paz, Bolivia and the U.S. Department of Justice in Washington, D.C. has focused on climate change and international environmental law and policy. He also spent the summer of 2015 in Bolivia to conduct independent fieldwork in the Amazon on the discourse of climate change adaptation and development for his honors thesis in Geography. On campus, Brett held leadership positions in Berkeley Model United Nations and Delta Phi Epsilon, Cal's co-ed professional fraternity for international affairs. He also spent one semester at the Pontifical Catholic University of Rio de Janeiro in Brazil. Born and raised in Argentina, Ailen has long been interested in how national territorialization efforts in Latin America work in and through processes of invisibilization and dispossession of those most marginalized. Ailn is a Mellon Mays Undergraduate Fellow and has conducted previous ethnographic research on issues of territoriality between Mapuche indigenous communities, oil and natural gas companies, and the local and national government in Neuquen, Argentina for her honors thesis in Geography. During her years at Cal, Ailn also majored in Political Economy, interned for Tata Steel Rural Development Society in Jamshedpur, India, and studied abroad at the Catholic University of Salvador in Brazil. 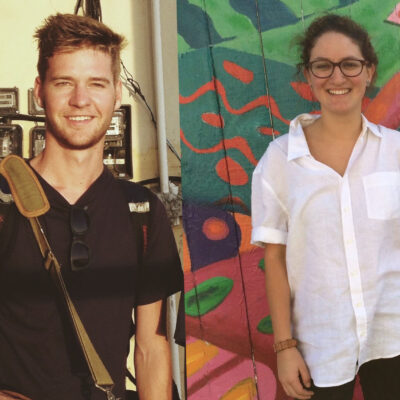