Detroit has become the poster child for the impact of both deindustrialization and economic collapse on America’s inner cities. However, in the face of overwhelming problems, there is a growing movement to rebuild and re-imagine Detroit. Increasingly, Detroit is being seen not just as a place of despair, but as a source of inspiration in imagining new possibilities for cities in the twenty first century. Isaac’s project will use workshops on poetry, community organizing, and participatory urban planning to empower Detroit youth as leaders in confronting the city’s crisis and opportunity for change. “Youth Poetry and City Creation” will center around workshops for youth between the ages of 13-21. These workshops will create a space to build critical literacy, empowerment, and creativity, and will teach the fundamental skills of urban planning, community organizing, and writing and performing poetry. This novel combination will allow young people to participate in an educational space that values their experiences of the city and their visions of what Detroit could become, while giving them the concrete tools to put those ideas into action.

At Berkeley, Isaac double majored in Ethnic Studies and Interdisciplinary Studies (ISF), with a minor in Global Poverty and Practice. For his ISF major he created a concentration in Hip Hop, Globalization, and Urban Space, writing a senior thesis on the relationship between hip hop culture and the built environment in Detroit, Rio de Janeiro, and Palestine. A long time participant in the youth spoken word poetry movement, Isaac has been attending Brave New Voices, the International Youth Poetry Slam Festival, since age 13. A member of a youth poetry group in his hometown Chico, Isaac continued his involvement after moving to the Bay Area, working with Youth Speaks, a San Francisco-based spoken word educational non-profit. Isaac interned at Youth Speaks, served on their youth advisory board and worked as a poet mentor and member of their school visit team, performing at assemblies and leading workshops at schools throughout the Bay Area. In 2007 he was the Bay Area Teen Poetry Slam Champion. That year he was also a member of Bay Area youth, collegiate, and adult poetry slam teams, performing on the finals stages of their respective national competitions. Interested in the intersection between youth empowerment and the built environment, in Spring 2010 Isaac became a mentor with the Y-PLAN (Youth-Plan, Learn, Act, Now!) course through the UC Berkeley Center for Cities & Schools. Through Y-PLAN, Isaac worked on a community development project with students at Kennedy High School in Richmond. During his time at Berkeley Isaac was a member of Cal Slam, the campus spoken word collective, producing monthly poetry slams and open mics and helping to organize benefits and educational events such as Poetry After the Storm, Peace Not Prejudice, and Pink Ribbon Poetry. Additionally, Isaac helped create Activism Right There (ART), a festival dedicated to celebrating Berkeley's legacies of cultural and political activism. A member of the progressive student political coalition Cal Students for Equal Rights and a Valid Education (CalSERVE), Isaac has worked both inside the ASUC student government and as a part of grassroots campaigns to make Cal and the UC system more socially and environmentally just, diverse, and accessible. As a member of the Solidarity Alliance, working alongside students, faculty, and workers, Isaac was a part of organizing efforts against the 2009 UC fee increase and against budget cuts to California public education as a whole. 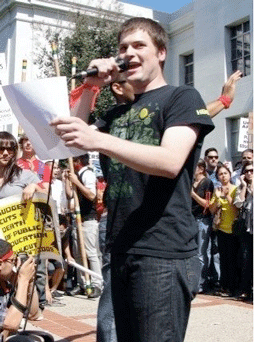