With My Own Two Wheels

For many in America, the bicycle commute is a lifestyle choice. For the other 99% of the world, each pedal stroke is progress out of poverty, toward an education, and over the mountains of social and cultural discrimination. With My Own Two Wheels, a feature- length documentary, will link together the stories of individuals who have been empowered by the bicycle. With the help of six bicycle development projects, With My Own Two Wheels will tell the stories of individuals from Belgium, Rwanda, Zambia, Ghana, India, Guatemala, and the United States. Despite the geographical distance between them, and the differing challenges that they face, all seven people profiled in the film have overcome hardship with the help of their bicycles. The film will launch a global fundraising campaign to get bicycles to health workers, farmers, and students around the globe so that they can change their worlds … with their own two wheels.
To view the documentary, see http://www.viewchange.org/videos/with-my-own-two-wheels.
Jacob’s latest short video (Pedal Born Pictures, 2016): https://vimeo.com/186471885

Jacob came home from the hospital in a bike trailer. It was love at first ride. At the age of 13, he joined the Corps of ReDiscovery, a group of middle school students and their teachers bicycling across the across the United States in the footsteps of Lewis and Clark. Jacob has since led bike trips with middle school students in Vermont, British Columbia, Italy, and Rwanda. While pursuing a major in Peace and Conflict Studies and minor in Global Poverty and Practice, he spent semesters in the Balkans and Rwanda. While in Rwanda, Jacob helped distribute special cargo bikes to coffee farmers and train mechanics at the coffee cooperatives. He shot a documentary short entitled Pascal's Bike ( http://vimeo.com/5601774) about one such farmer and his cargo bicycle. The film premiered at the 2009 Santa Barbara International Film Festival. With My Own Two Wheels is his way of passing the power of two wheels on to those who need it the most. 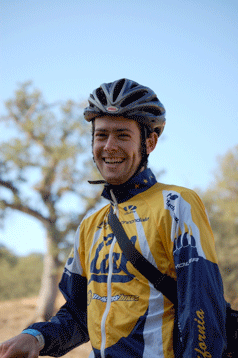