Cinema Sin Fronteras (CSF) is a 10 month long program created for undocumented young adults interested in learning how to be independent filmmakers; the program aims to reduce the gap between the film industry and undocumented creators. Through the program, participants will learn how to analyze scripts and films, write screenplays, and create an independent short film. By the end of the program, each participant will have a semi-professionally made short film to add to their film reel, as well as have experience working on other independent films. Each person will have the opportunity to play different roles in the process of creating a film which includes: director, producer, cinematographer, gaffer, and editor. The program will provide all of the necessary equipment needed to make a film, which is often inaccessible to undocumented communities. CSF also aims at diversifying the stories being told about the undocumented immigrant experience in the United States and hopes to complicate the good immigrant/ bad immigrant narrative that has been pushed forward in mainstream media. Beyond the benefits of learning to become independent filmmakers, CSF is also an opportunity to develop teams of undocumented creatives interested in collaborating. In addition, the program will provide career and educational development opportunities for participants.

Javier Lopez Quintana was born in Michoacan, Mexico and migrated to the United States with his parents at the age of 4; he was raised in Southeast Los Angeles. Since Quintana helped his family financially, his academic career began as a part time student at East Los Angeles College. While working at a shampoo factory for close to a year, Javier saw the detrimental conditions of laborers, especially undocumented workers. He used that pivotal moment to attend East Los Angeles College (ELAC) full time and dedicate his education toward helping and organizing with vulnerable communities through the American Federation of Teachers (AFT). Javier's work as an organizer taught him the power behind giving a platform to underserved and underrepresented communities. Javier graduated from the University of California Berkeley in the Fall of 2019 with a degree in Political Science and a certificate in Film and Media Industries and Professions. Currently, Javier is in charge of Friends Afuera, a letter writing program that supports undocumented people in detention centers emotionally and financially. Javier also works with Friends Afuera volunteers to help release people from detention centers. He also works at the Latinx Research Center as a media coordinator in charge of creating film materials for the center. Javier is deeply invested in filmmaking. His film The Perfect Immigrant won the Jurys Choice award at the UC Berkeley Campus MovieFest. His film Casa Sin Fronteras was selected to play at BAMPFAs Student Film Festival and won Best Documentary Film at the Grizzly Film and Arts festival. Whether it is through writing, filmmaking, organizing, or advocating, Javier aspires to continue to learn skills he can use to uplift, inform, and work with marginalized communities. 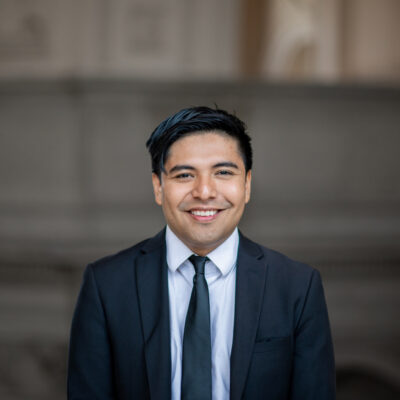