By constructing a history and political economy of the “IRCA generation” of migrants*, this project will present a counterpoint to the burgeoning public migration debate and eminent legislation. Three million undocumented workers obtained legal status under Immigration Reform and Control Acts (IRCA) 1986 amnesty provision. Yet remarkably, no significant attempt to recount the lessons and histories of this legislation has been made, even as a new amnesty law may be imminent. This time around, the resurgence of the migration debate has brought impassionate arguments for the provision of amnesty to millions of undocumented migrants living in the U.S. as a form of economic stimulus.
Migrant cultural assimilation is being articulated as their participation in home mortgage markets and in stressing that granting legal amnesty to undocumented migrants would generate an estimated input of $500 billion into the economy, immigration reform is also being promoted as a path to recovery from the recession
What public discourse around migration and the economy illustrates is mass historical amnesia. As my proposal suggests, predatory lending to the benefactors of 1986s IRCA is a key dynamic missing from narratives of the Great Recession. By resurrecting a lost history, this project will advocate for the responsible inclusion of newly documented migrants into American society and specifically credit markets.
The goals of this proposal are three, constructing a communally generated history of the neglected IRCA generation, conducting historically informed advocacy for the responsible integration of incoming migrants affected by new legislation, and producing web-based and a network of on-the-ground resources for migrants trying to make sense of the imminent immigration legislation during its implementation.
*I use the term migrant, rather than immigrant, to denaturalize a U.S.-centered conception of the movement of capital, where the U.S. is the inter space into which outsiders flow. Central to this project is to show the transnationality and multidirectionality of credit and labor in the context of migration and the Great Recession. I will use “immigrant” only when referring to specific legislation.

Luis graduated in December 2012 with degrees in Political Economy and History. During his time at UC Berkeley he served on the editorial board of the Berkeley Political Review and worked at the Blum Center for Developing Economies. For his interdisciplinary degree in Political Economy, Luis combined classes in Development Studies, Economics, Geography, and History. Luis wrote a thesis for the Department of History that traced the development of market logic in universities to a series of Progressive-era wartime projects and debates, complicating narratives that point to the start of privatization in the 1970s. Through this thesis, Luis became involved in the yearlong 2012-13 On the Same Page: Clark Kerr and Ansel Adams project, which asked students to re-imagine the public university at a time of austerity. Luis has also conducted research for the Oakland Institute, a progressive development think tank based in East Bay. His research illustrated the connections between Western development aid and a violent forced resettlement government program in Ethiopia. After completing his Stronach project, Luis hopes to attend graduate school. Outside of school, Luis enjoys watercolor and oil painting, foosball, and attending music concerts. His most cherished memories of college come from his time living at Davis House, a cooperative home in the Berkeley Student Cooperative. 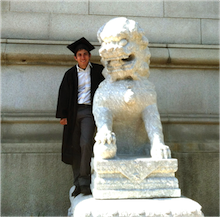