Petro Kostiv is working with three indigenous Zulu communities in South Africa who were forcibly displaced from their land by the racist policies of past governments. Due to historical, socio-economic, and political marginalization, many dispossessed South Africans are still unable to have their grievances recognized today. Such communities were identified merely as a landless people following the end of apartheid while the harsh reality of their daily lives remained ignored. Petro’s chief objective will be to study and give voice to their struggle in the new political context of democracy. His project will build on South African field work concerning apartheid that he completed in spring 2006 for his senior thesis in the History Department.

Petro received a Bachelor of Arts in History with high honors from UC Berkeley in May 2006 two years after he transferred from Long Beach City College. His understanding of the political frailties that engulf South Africa today is informed by his experience living in the young democracy of Ukraine, the country of his birth, where he witnessed the political and socio-economic instabilities caused by the transition from communism to democracy. While at Berkeley, Petro helped to found a free school in Peru that promotes literacy among middle- and high-school children. The school provides textbooks that the students could not otherwise afford and supplements their instruction in the public system. After completing his project on land reform in South Africa, Petro plans to attend law school where he will draw on insights gained from living and working on three continents (Europe, Africa, the two Americas) in order to study the developing world and international law. 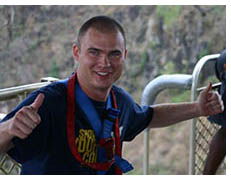