Other Frames: From 'Dream Factory' to Dream Communities

For his Stronach Baccalaureate Prize project, Ricardo will return to his hometown of Oxnard, California to build film collectives at local high school sites. Through collaborative workshops, skill-shares, and community events, students will learn how to develop, produce, and share their own voices, visions, narratives, and creative expressions through film and video. Ricardo states, “Through working on this project, I also plan to collaboratively discover and document a pedagogical approach to teaching film theory and practice that is both culturally relevant to youth from low-income communities of color and up-to-date with contemporary digital video and online publishing practices.”
You can see a short presentation on Ricardo’s project at http://prezi.com/xslrobkokvu2/cihs-videofilm-informational-presentation/

Ricardo Gomez grew up in Oxnard, California, a predominantly Latino and low-income farm community in Ventura County. As a first-generation college student and undergraduate at UC Berkeley, he spent much of his time as an activist, designer, video documentarian, and educator. He majored in Interdisciplinary Studies, with a concentration in Technology and Society and a double minor in Education and Ethnic Studies. Through the UC Berkeley McNair Scholars Program, he has had the privilege of doing research on the intersection of racialized and gendered mass incarceration and digital social media. Growing up in a family with a large appetite for cinema, Ricardo has been a film lover since he was a small child and has made low-budget films and documentaries since high school. He believes in the power of cinema to build community, understanding, care, and resistance. 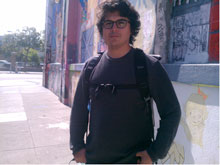