Documenting the Effects of the Shahtoosh Ban in Jammu and Kashmir: A Proposal to Find Alternative Sources of Income for Kashmiri Women

Samma Ishaq will evaluate the economic status of women living in Jammu and Kashmir (India-administered Kashmir). It is estimated that the livelihood of at least 50,000 workers, 74 percent of them women, was impacted when the local government banned the manufacture and sale of shahtoosh (a fine grade of shawl derived from the Tibetan antelope) in October 2000. Investigating this claim, Ishaq will assess the effect of the shahtoosh ban on the local economy, particularly on displaced female weavers. Her report will take into account the painful consequences of militarization over the past two decades since the region came under dispute by India, Pakistan and Kashmiri resistance fighters in 1989. Ultimately, she seeks to create a new program together with local NGOs that will empower and offer a source of revenue for the weavers, while addressing poverty issues that affect women.

Earning high honors, Samma Ishaq received a bachelor of arts in history in May 2008. Her studies concentrated on South Asia with a minor in global poverty and practice. At Berkeley Samma was involved in a number of activities related to human rights, women, public health, and international development. Her March 2008 article Muslims Under Radar in India Currents reflects her interests, which led her previously to intern for Barbara Boxer in the U.S. Senate and Lord Rotherham in Englands House of Lords, and to assist with cancer research at Marylands Center for Prostate Disease Research. Moved by the dire situation of the poor in her native Kashmir, Ishaq cofounded the non-profit KashmirCorps in 2006 to send volunteers to work with NGOs there. At the same time she collected oral histories about mental health and gender issues and tutored orphans in Kashmir. In alternation with her Stronach project, she plans to set up diabetes clinics in Vellore, India in 20082009 with the support of the Global Sciences Department at the University of California, San Francisco. In the future she hopes to pursue a J.D. in law and an M.A. in development studies. 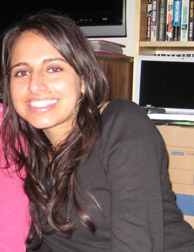