Saras project, the Social Justice Sewing Academy (SJSA), establishes a critical-consciousness sewing program for youth in inner-city areas who need an outlet to express themselves and want to develop a potentially profitable skill. She will run two pilot sessions this summer, and will later permanently establish SJSA in partnership with a community or recreational center or high school. SJSA will be comprised of two parts each day. First there will be a workshop developing participant’s critical consciousness. Workshops will feature concepts such as colorism, intersectionality, feminist epistemology, and misogyny in hip hop. During these workshops, participants will discuss readings from Angela Davis, bell hooks, Kimberly Crenshaw, Toni Morrison, Patricia Hill Collins, Maya Angelou, Audre Lorde and others. SJSA will allow participants to explore, discuss and express modes of knowing, lived experiences and creativity. Following the morning workshop, there will be in-depth sewing instruction tapping into their creativity by introducing sewing techniques, color theory, and artistic expression. During the sewing portion of SJSA, Sara will teach the participants machine safety, how to properly cut fabric, how to assemble and piece blocks together along with pattern design. Individual projects will include sewing baby quilts for local womens shelters, basic darning and mending to increase thriftiness, sewing backpacks for personal use along with pajamas, pillow cases and other small items. The collaborative culminating group project will be designing an art quilt on a social issue they care aboutto be featured in an art show at the end of each academy session.
Follow Sara’s project at http://www.sjsacademy.com/
https://richmondconfidential.org/2019/03/08/richmond-art-center-showcases-the-work-of-the-social-justice-sewing-academy/

Sara, the only child of Eddie and Katrinka Trail, began sewing when she was four-years-old; she was taught by her mother, grandmother and aunt. Sara wrote a nationally published book, Sew with Sara and starred in a DVD entitled Cool Stuff to Sew with Sara, created two signature fabric collections, and designed a pattern line for Simplicity. Trayvon Martin was 14 days older than Sara, and in 2012 his murder inspired her to create an art quilt memorial featuring his face shrouded by a grey hoodie. At that moment, Saras love for sewing and passion for social justice became intertwined. She graduated from UC Berkeley in December 2015 with a bachelors degree in American Studies and minors in Education and African American Studies. Sara enjoys outdoor activities, traveling, and spending quality time with her family and her significant other. 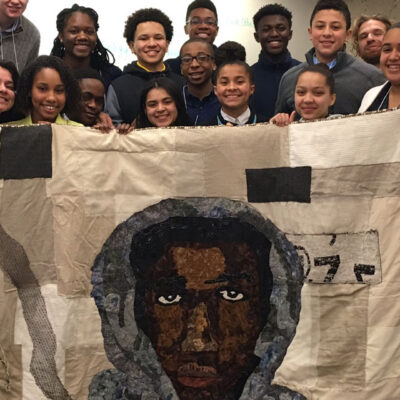