The 2010 World Cup's Effect on Xenophobic Violence in Cape Town

My research this summer analyzes the effects of the 2010 World Cup on xenophobia and interethnic violence in Cape Town. Working in conjunction with the NGO Projects Abroad Human Rights Office, I will document cases of xenophobic violence from January to August 2010, graphing how rates of violence fluctuate in response to the Cup. I will supplement this evidence with informal testimony from a range of communities within Cape Town to see how different people view this international event as affecting levels of xenophobia in the city. In totality, the research is meant to explain the effect of this specific World Cup on the human rights situation in Cape Town, and to add to the larger body of research that studies how international events such as this alter the political economies of the regions in which they are held.

This research presents me with an invaluable opportunity to document the responses of different communities to the largest sporting event in the world. The research capitalizes on the timeliness of the World Cup, as it is being held in Africa for the first time in its history. To analyze how it ameliorates or worsens xenophobia in Cape Town is critical in theorizing how global events serve to modernize and sustainably develop Global South communities. As I have worked to progress human rights in South Africa for two summers now, this year's research is most critical, as it presents the largest potential catalyst to the socioeconomic situation of residents of Cape Town. 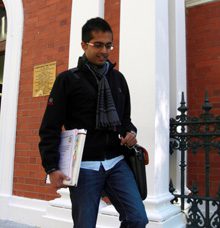