The catalytic profile of supramolecular hosts is analogous to that of most enzyme active sites and biological chaperones, which provide both entropic and enthalpic incentives for rapid and reversible substrate encapsulation into their hydrophobic cavities and catalyze reactions by stabilizing transition states. So far, the Raymond group has made significant advances in the study and further development of M4L6 tetrahedral clusters. These tetrahedral clusters are composed of four gallium ions which make up the vertices of the tetrahedron and six organic ligands which make up the edges of the tetrahedron. Each ligand is made up of a central aromatic backbone that gives the ligand rigidity and two terminal chelating moieties which bind to the metal centers of the cluster. Altering the chelating moiety and/or aromatic spacer of these molecules can lead to novel host structures with different catalytic profiles. Since the properties of the ligand structures will determine the catalytic profile of the resulting host structure, it is important to study these properties in order to be able to create host structures that can predictably self-assemble and catalyze reactions enantioselectively. Hence my project aims to create a new ligand that is composed of a central aromatic anthracene spacer and two terminal chiral terephtalamide moieties. The structure of the new ligand is informed from previous structures and will be synthesized in order to see whether it can self-assemble into a tetrahedral conformation and catalyze reactions enantioselectively through chiral induction of its terminal alkylamide moieties.

I would like to thank the Rose Hills Foundation for funding my research over the summer and the SURF program coordinators for guiding me through the process of becoming an independent scientist. The SURF Fellowship allows me to devote my undivided attention to my research and develop skills that I will need as an aspiring researcher. I am extremely grateful for the opportunity to continue working alongside a truly fantastic group of scientists and honing skills that I will need in my future endeavors. 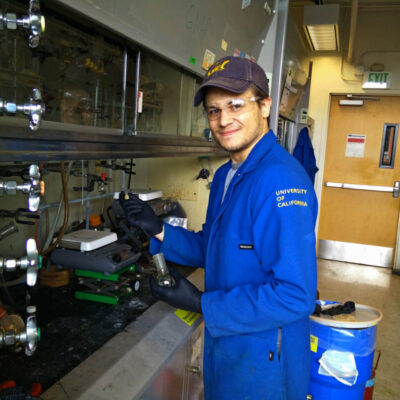