As a slave narrative, Harriet Jacobs’ autobiography bears the burden of truth telling demanded by this genre. However, this categorization has largely prohibited critics from fully addressing Jacobs’ utilization of fantasy, which becomes apparent in her seemingly unbelievable and fantastic portrayal of her protagonist’s ability to constantly thwart her master’s sexual advances. Continuing my exploration of fantasy in Jacobs’ text, I will spend this summer reading extensively in psychoanalytic theory in order to further articulate an argument that accounts for the work’s fictional aspects as a manifestation of psychological trauma. I will also research primary and secondary documents related to slavery, especially slave narratives, so as to better understand the genre and the tremendous implications of Jacobs’ break from it.

To me, it's remarkable and fascinating that Jacobs, an ex-slave woman, could incorporate fiction into a narrative that was supposed to be explicitly truthful, thereby allowing herself to cope with her trauma and assert her authorial control when African American authorship was not yet fully realized. However, the fact that my project challenges certain aspects of our present understanding of Jacobs' text is intimidating. I have to do a tremendous amount of work to not only establish that there is fantasy in the narrative, but also that Jacobs is compelled to utilize fiction because of psychological trauma. But that's why I am so excited to have the opportunity to spend the summer performing research in preparation for writing my thesis. 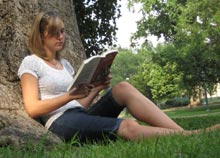 Major: English
Mentor: Bryan Wagner, English
Back to Listings
Back to Donor Reports