The Emperor Augustus, the first emperor of Rome, transformed a republican government with almost 500 years of history into an imperial monarchy that would last for another five centuries. It is important to understand the sources of Augustus political legitimacy so that I can understand how changes to those sources of imperial legitimacy, like the changes made by the Emperor Severus, led to the Third Century Crisis. By allowing me to focus on Augustus, this fellowship is an integral part of an ongoing project culminating in my senior thesis. Ultimately, I am examining the role the emperors legitimacy played in the political breakdown and violence of the Third Century, which may give us insight into effective sources of political legitimacy.

To be able to spend two months reading documents from the First Centuries BC and AD about the Emperor Augustus is a real treat. I am fascinated by Augustus unprecedented and unparalleled political success. That one man managed to transfer so much political power to himself is amazing; that he was then able to keep that power until he died a peaceful, natural death almost 45 years later is, in Western Civilization, historically unique. I am privileged to be able to compare this mans sources of power to those of a later emperor and, in doing so, to contribute, albeit in a small way, to the historical scholarship on the causes of the Third Century Crisis. 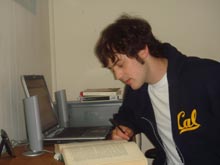 Major: History
Mentor: Carlos Norena, History
Back to Listings
Back to Donor Reports