Culture has played a large role in human’s abilities to adapt to the environment. By learning from other people, novices are able to skip the steps of trial and error learning that may be costly, or even fatal. One of the primary ways that culture is transmitted between generations is through social learning. Beginning in the 1990s some scholars have noted that social learning may be disadvantageous if a majority of people have erroneous views about the environment. In this setup, populations may descend into rational “herds” in which people, rationally, disregard their own environmental signals in favor of going with the incorrect social view. Such herds are hypothesized to be the cause of market booms and busts. This project will provide experimental evidence on how people use ordered and independently generated social cues to make behavioral decisions shedding light on the origins of rational “herds”.

For the past few years I have been very interested in modeling human social learning. I am grateful for the support this SURF/Rose Hills grant provides, and will cherish the ability to explore this topic in a senior thesis with a depth that would not have otherwise been possible. 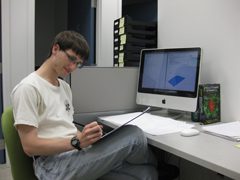