Radicals for Capitalism': Ayn Rand and the Conservative Youth Movement of the 1960s

During the turbulent 1960s, controversial novelist Ayn Rand became a forceful voice for lost and disaffected youth. Through her seemingly impenetrable philosophy of Objectivism, Rand offered a round universe of order, rationality, and certainty for young libertarians who felt that neither liberals nor conservatives fully addressed national issues. My project will center on this undeveloped aspect of Randian scholarship her palliative, almost spiritual, role in the intellectual history of youth. More specifically, I will consider how Rands followers attempted to propagate Objectivism within an overwhelmingly liberal campus atmosphere, while also creating their own subcultures outside the walls of academia. Although this undercurrent of protest seemed to fade over time, Rands continued appeal would demonstrate the longevity of the libertarian sensibility in the American psyche.

In addition to the time and funds needed to pursue independent research, SURF provides a supportive community of other scholars who will help to refine my ideas. Furthermore, this opportunity grants me access to the Ayn Rand Archives, an invaluable resource in beginning to understand how Objectivists grappled with their subcultures most glaring paradoxes. By examining rare primary sources like fan letters and press clippings with Rands marginalia, I will finally be able to start resolving a question which has long interested me, but which I previously did not have the means to answer. What I learn in the course of this project will then serve as a launching pad for historical inquiries which I intend to cultivate further in graduate school. 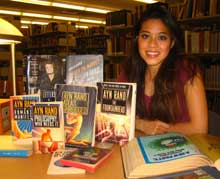 Major: History
Mentor: David Hollinger, History
Back to Listings
Back to Donor Reports