Our lives are defined by the ability to make decisions. This fundamental function hinges on complex computations emerging from the integration of sensory, motor, and value information. Decision-making computations are thought to be strongly modulated by dopamine in the dorsomedial striatum. I will measure dopamine release in the dorsomedial striatum during decision making and test if it follows predictions made by two reinforcement learning models. The first model, Temporal Difference (TD) theory, predicts that dopamine activity in mice will be a function of reward prediction error, which is greatest when rewards are unexpected. The second model adapted from Gershman & Uchida (2019), is an alternative version of TD, in which dopamine signal is computed from an inferred belief-state, reflecting the level of uncertainty in the environment. The purpose of my research is to test whether this new belief-state model predicts dopamine activity in the dorsomedial striatum better than the older TD model.My project will be relevant to understanding addiction. All addictive substances and experiences affect dopamine release in the striatum. Through this mechanism, addictive drugs and experiences are thought to alter neural representation of action value, and thus alter decision-making. We believe deeper understanding of the role of dopamine in decision-making will facilitate the development of new treatments for addiction.

This summer I was given an incredible opportunity to explore my interests and gain valuable experience as a researcher. Despite our global health crisis limiting access to the lab, I was able to focus my time on learning critical data analysis skills. More importantly, I began learning how to communicate my science, ask specific questions, and think through an experimental setup to probe these questions. Becoming a scientist has been a dream of mine for many years now. As a first-generation college student from a blue-collar family, the opportunity to engage in the process of academic research at this point in my education wouldn't have been possible without the Pease Fund and their generous donation. 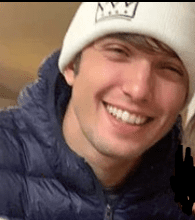