The Mechanism of Nor-1 Mitochondrial Translocation during Thymocyte Negative Selection

Nor-1 is a protein that can promote death of CD4+ CD8+ double positive thymocytes, cells in the process of maturing into T cells. In the thymus, these double positive thymocytes undergo a process called negative selection, in which any thymocytes that recognize self-molecules that our own body produces are killed. This makes sure that our body mounts an immune response when it encounters a foreign pathogen. Failure during this negative process results in autoimmune diseases such as systemic lupus erythematosus (the go-to disease whenever someone is sick in the episodes of House), Graves’ disease and rheumatoid arthritis. Presently, the exact molecular mechanism of negative selection is poorly understood. Nor-1 can induce apoptosis (cell death) by assisting in translations of new proteins, but it can also promote cell death by moving into the mitochondria and turning on Bcl-2 into a pro-apoptotic molecule by exposing its killer BH3 domain1. The mechanism for inducing Nor-1 movement remains unclear. Additionally, the relative importance of the transcriptional versus mitochondrial Nor-1 killing mechanisms is unknown. I hope to identify the portion of the protein necessary for mitochondrial translocation (Nor-1 movement) by creating mutant Nor-1 proteins and seeing where these proteins end up within the cell. I will also compare the relative importance of transcription-dependent and mitochondrial killing.

I knew that I was staying in Berkeley during the summer to do research, but I wasn't sure how I would be able to pay my rent. I thought about discontinuing my research and going back to my parents' house, or at least working part-time. But I knew this would be detrimental to the quality of my thesis project next year. Thanks to the scholarship, I am able to commit fully to my project without worrying about my living expenses. Hopefully, I can get solid data that can really help with my paper! 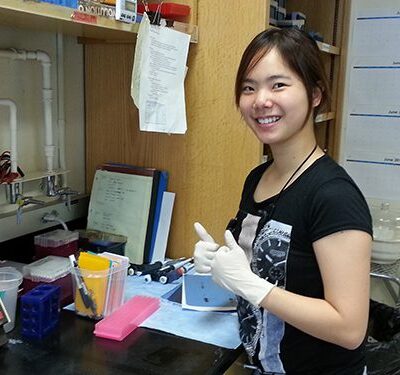