TRPA1 ion channels are a specific example of a protein class that help the cell interact and respond to its environment. TRPA1 channels have been shown to consist generally of six trans-cell-membrane segments with two ends, an N-terminal and C-terminal end, with the N-terminal end extending into the cell. This endo-cellular region consists of 16 structural repeats called ankyrin repeat (AR) motifs. Studies have shown that TRPA1 channels in snake cells respond more to heat than chemical stimuli, in contrast to similar channels in mammals. Past research has also shown that by interchanging ARs 3-8 and 10-15 from humans to snakes (and viva versa), the relative responsiveness of TRPA1 to temperature changes. Our research is aimed at using circular dichroism (CD) to identify why these specific ARs changed the TRPA1’s response. We also hope to investigate how the order of the ankyrin repeats impacts motif response to temperature.

I have always been interested in performing biology research ever since I took a biotechnology course at my high school. I was fascinated and puzzled by the fact that a simple cell could respond to a plethora of different stimuli, and each response could lead to a change in the cell's function. Though I have performed and presented research in the past, my fields of study had nothing to do with biology. I am grateful for the opportunity given to me by SURF, my Principal Investigator Susan Marqusee, and my graduate advisor, Diana Koulechova, to perform biology research in a collegiate setting. Specifically, I would like to thank the Rose Hills Foundation for offering me financial support, allowing me to solely focus on research this summer and thereby produce results. 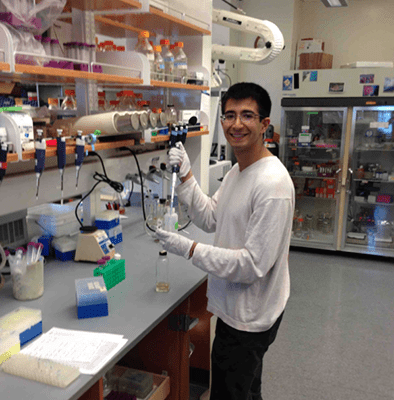