Vocal learning is a phenomenon specific to only certain species of animals, most notably humans. Vocal learning is the ability for an organism to use auditory feedback to produce vocalizations via imitation and modification of sounds from another organism. It is a unique type of learning that once understood in humans can provide valuable insight into how to help those who may have various speech disorders. In the Yartsev Lab, studies about such topics are performed on the Egyptian fruit bat (Rousettus aegyptiacus) an organism that also shares this ability and has a mammalian brain comparable to those of humans. There is a specific neural signaling pathway that has been the target of this specific type of learning, connecting the laryngeal motor cortex (LMC) to the nucleus ambiguus (N. Amb), which projects down to the larynx, the source of vocal activity. I will be furthering this research utilizing immunohistochemistry and more independently trying to create a 3D reconstruction of this pathway that would provide a more accurate, tangible representation of what is occurring in the brain.

I am incredibly grateful for the opportunities the Rose Hills Foundation has provided for me this summer. It would not have been possible without this support to take on such a summer project and it has allowed me to grow a lot as a more independent researcher. It gave me a chance to explore my own scientific thinking and build my confidence that I can go on to do much greater things in my future career. Because of this summer, I am more comfortable doing research and asking big questions that may not have answers yet, and I will carry this with me into my medical career and beyond. Thank you again for funding such a fulfilling summer. 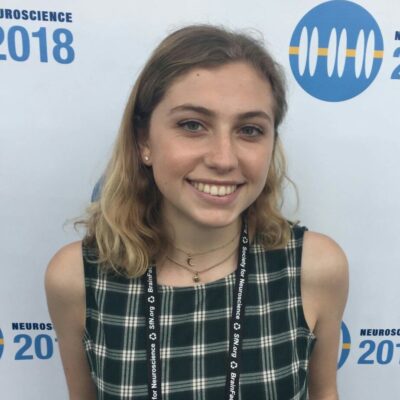