My research explores three major works of Jane AustenNorthanger Abbey, Pride and Prejudice, and Persuasionwith an eye toward Austens development of ideological and formal features of the novel, as well as her attempts to coach her characters and, by implication, the reader, in how to understand these new features. By analyzing Austens presentation of characters engaged in reading texts as diverse as novels, sermons, conduct books, letters, poems, situations, and countenances, I hope to develop an understanding of the way in which Austen desired her novels to be read and to explore the implications of Austens theories of reading practice upon the rise in the respectability of the novel in the late eighteenth and early nineteenth centuries.

This research represents the culmination of an idea that gripped me in my first college English course: what if late eighteenth-century novels depicted so many scenes of metaphorical or literal reading because their authors were in some way trying to model the way in which the new form of the novel ought to be read? Since its inception, this idea has been shaped by many other courses and texts, but ultimately this research allows me to engage on an intellectually demanding level with an author and texts that I love, and read Austen and her novels from the perspective of a reader as well as a critic. 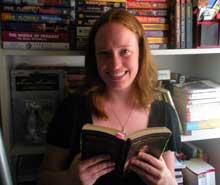 Major: English
Mentor: Celeste Langan, English
Back to Listings
Back to Donor Reports