It’s easy to see video games as fantasy worlds designed for pleasure and escape. In this project, I plan to look further into the real-life implications of virtual worlds–specifically military first-person shooters. When we consume war as a source of fun, what happens? Military FPSes, such as Call of Duty: Modern Warfare 2, involve certain assumptions–not just about global questions of the role of the United States as a military superpower, but about small-scale questions of how we are embodied in the world. These games invite us into the bodies of anonymous supersoldiers who see the world through the technologized eyes of Predator drones and heartbeat sensors. What kinds of bodies and perception do these games take as natural? What global dynamics of war and power do they transform into play?

I hope to use the tremendous opportunity of a SURF fellowship to explore the rich world of military FPSes through the lens of anthropological theory. I won't just be playing games (although of course that will be a crucial part of my research); I hope to draw heavily on the theory of embodiment in anthropology. I will also be exploring reactions, both popular and academic, to the nature and effects of playing video game wars. I hope to draw on the work of Roger Stahl, Caren Kaplan, James Der Derian, and N. Katherine Hayles, among others. 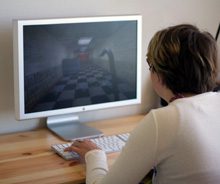 Major: Anthropology, Near Eastern Studies
Mentor: Cori Hayden, Anthropology
Back to Listings
Back to Donor Reports