The Role of Dopamine in Working Memory, Decisions Making, and Self Control

Dopaminergic projections from the midbrain to the striatum and prefrontal cortex are known to affect widespread brain processes, including reward, movement, cognitive control and working memory. Lower dopamine levels in the striatum are linked with higher body mass index, poorer decision making in relation to food choice and a skewed sense of healthiness of food items. I propose to investigate the role of dopamine in a working memory task and decision making on the food task and examine if a relationship exists between the two tasks. I will also investigate if modulation of dopamine, via a drug that affects mostly the striatum or one that acts more to the prefrontal cortex to elevate dopamine levels affects behavior. With dopaminergic administration, working memory as well as perhaps decision making in relation to food choices will improve in individuals.

Research has been a huge part of my undergraduate experience at Berkeley. During the last three years, I was involved in multiple psychology labs and thoroughly explored the different subfields of psychology. I found my academic niche in neuroscience. I am incredibly fascinated by the human brain and all of its functions. The SURF program provides me with a unique opportunity to do research full-time this summer and gives me a head start on my senior honor thesis. In the future, I will pursue a career in neurology and this project will expose me to the research aspect of neurology. 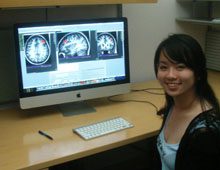