This summer, I will be conducting research on an astronomy project involving the data reduction and analytical characterization of several Hubble images of edge-on protoplanetary disks (dust around newly formed stars). This is a topic of interest since the study of pre-planetary systems lends clues to the still unsolved mysteries of the formation of planetary bodies, as well as life in the universe.
Comparing high-resolution scattered light images of edge-on diskswith synthetic images from radiative transfer modeling is a powerfulapproach to constrain the disk mass, structure and dust content. By the end of the summer, I will have produced color maps across the visible band to identify and characterize wavelength-dependent properties of these disks. In turn, these will allow us to differentiate features that are related to the dust properties (opacity, scattering phase function) from those tracing the physical structure of the disk (in particular its vertical density profile). By probing a diverse set of disks with a uniform approach, we will be able to probe possible signs of evolution in this critical stage of planet formation.

"To the Rose Hills Foundation, I wish to express endless gratitude in receiving this prestigious scholarship, which will allow me to achieve my dreams by finally finishing my research project I began a few semesters back, which involves the data reduction and astrophysical analysis of protoplanetary disk structure. My goal is to publish my research in a peer-reviewed paper by the end of the summer. Overall, I am excited to see a project that I started come to completion. It was through this project that I realized I am interested in protoplanetary disks and planetary bodies, and am working on a minor in planetary sciences to compliment my astrophysics major. I hope to research this subfield in my graduate studies, and eventually in my future career. Without this scholarship, none of this would have been possible, so again, thank you. With kind regards, Carolina ""Cee"" Gould" 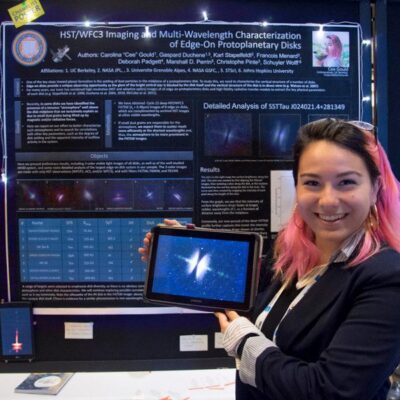