As a third generation ethnic Chinese in Mexico, my research interests focus on the Chinese communities in Mexico. The Chinese people have reached many corners of the world primarily to search for new job opportunities and to start new homes. Especially active during the 19th century, the Chinese mostly migrated as coolies or contract workers, attracted to developing areas like Mexico where emerging economic needs and activities offered them job opportunities. Like my great-grandfather, with time and hard work, Chinese migrants in Mexico eventually started their own businesses, like Chinese restaurants. Chinese restaurants were lucrative because Chinese food was and continues to be considered as an exotic cuisine. Many Chinese in Mexico today work in Chinese restaurants and eventually open their own Chinese cafe or restaurant. Although Chinese migration to Mexico can date back to the colonization of Spain and the current population is over 50,000, they still remain an obscure social group. As part of the Chinese community in Mexico myself, I feel the responsibility and need to give ourselves a voice, which drives me to research the Chinese life experiences in Mexico, primarily focusing on Chinese restaurant workers.

My research project is exciting, because it is an obscure topic that only a few have researched upon, and much more of it remains untouched. I get to be one of the first to research on the Chinese communities in Mexico, which means the work I develop will become primary resources that others in the academia or the public can utilize. It is a wonderful experience, because through fieldwork I had the opportunity to interview many Chinese in Mexico helping to better understand my own background at a personal level. I not only gained academic knowledge and research experiences but also networked with different Chinese professionals and families in Mexico. 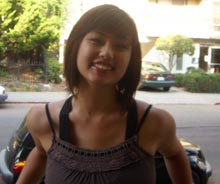