After half a decade of political turmoil and the rise of social and indigenous movements in Bolivia, elections in 2006 and early 2007 have put the new party “Movement Towards Socialism” lead by Evo Morales in power with the charge of “refounding” the state and writing a new constitution. This summer I will travel to the constitutional capital Sucre, and observe the ongoing process of drafting new articles in the constitution under the categories of “Land and Territory” in the Constituent Assembly. Through onsite research and interviews, I hope to gain insight into the politically contested processes of remapping the Bolivian state in relation to emerging conceptions of indigeneity and “intercultural” social relations. The shape of the new constitution will not only have repercussions for the nationally divisive politics of land inequality and regional autonomy, but additionally the convening of a new constituent assembly in Ecuador and wider shift towards leftist politics in Latin America.

Academically, the SURF grant will give me the opportunity to engage with professors and experienced researchers seriously on topics that have become very important to me. I am thrilled to take this opportunity to travel back to Bolivia and further engage with the exciting and transformative political climate gripping this Andean country. I am motivated to see the potential strengths and pitfalls of the new articulation of "counter-hegemonic" politics in Bolivia and in same small way contribute to academic understanding and debate of these new social and geographic formations in critical geography. 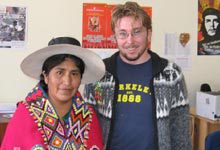 Major: Geography
Mentor: Michael Watts, Geography
Back to Listings
Back to Donor Reports